Being an American, visiting both Hiroshima and Nagasaki (in that order), and standing under both “hypocenters,” (geographic places where the atomic bombs exploded) was a moving and sobering experience.  Each city has established a Peace Park with museum that tells the details of the explosions of the atomic bombs and their aftermath.  These Peace Parks promote peace, of course, and share knowledge on the danger of  nuclear proliferation.  We were constantly stopping, looking around, and really thinking of the devastation that these two bombs wrought.  Talk about “pause for thought”!

The  Hiroshima bomb was exploded at 8:15 am on August 6, 1945.  It was a beautiful summer day with clear blue skies. The picture above of the A-Bomb Dome shows the remains of the building which was the Hiroshima Prefectural Industrial Promotion Hall.  The bomb exploded approximately 600 meters above this building.  The heat from the bomb melted the copper dome on top.

A-Bomb Dome with "before" and "after" picture

After the blast and the ensuing cleanup, there was much controversy in Hiroshima about whether or not this building should be torn down, as many other buildings were.  Many Japanese wanted all reminders of the blast removed or erased.   Obviously it was preserved, but it took over 20 years to reach a final decision.  It was decided in 1966 by Hiroshima to preserve it; it was made a UNESCO World Heritage Site in 1996, again after much discussion. China was against it becoming a UNESCO site because it would downplay the fact that Japan had killed many more people during the war in places like China, etc. so why should their war memorial be made a UNESCO site?  The US was also against this because it said that having a specific war memorial would not consider the whole context of the war itself.  The US did not cast its vote in this decision. (Wikipedia).

The reason why much of this building survived intact was because there was less downward force from the blast…more force went out horizontally.  The people working inside this building were all killed instantly.  Overall, over 70,000 people perished at the time of the blast, and another 70,000 died from injuries from the radiation (Wikipedia).  The magnitude of this was all very hard to fathom. Hiroshima had a population of about 340,000 to 350,000 before the attack.

The Hiroshima Museum is a very comprehensive account of what happened after the explosion, along with the history leading up to it, complete with a letter from Albert Einstein to FDR, saying the splitting of an atom could be used to make a bomb, and the Germans were probably working on it…to the attack, after effects, to the individuals’ stories of those who died, to the modern day problem of nuclear proliferation.  It was filled with artifacts from the blast, like personal remnants; a child’s lunch box, that was the only piece found by one parent to remember their child by…all very sad stories…  Many middle-school-aged children were killed because they were there, not in school, when the bomb went off.  They were involved in the war effort tearing down buildings to make fire lanes, in case of fire from the imminent bombing that they expected.  Hiroshima had been spared from bombing, along with the other potential targets, as the US wanted to isolate and thus measure the force of one bomb… 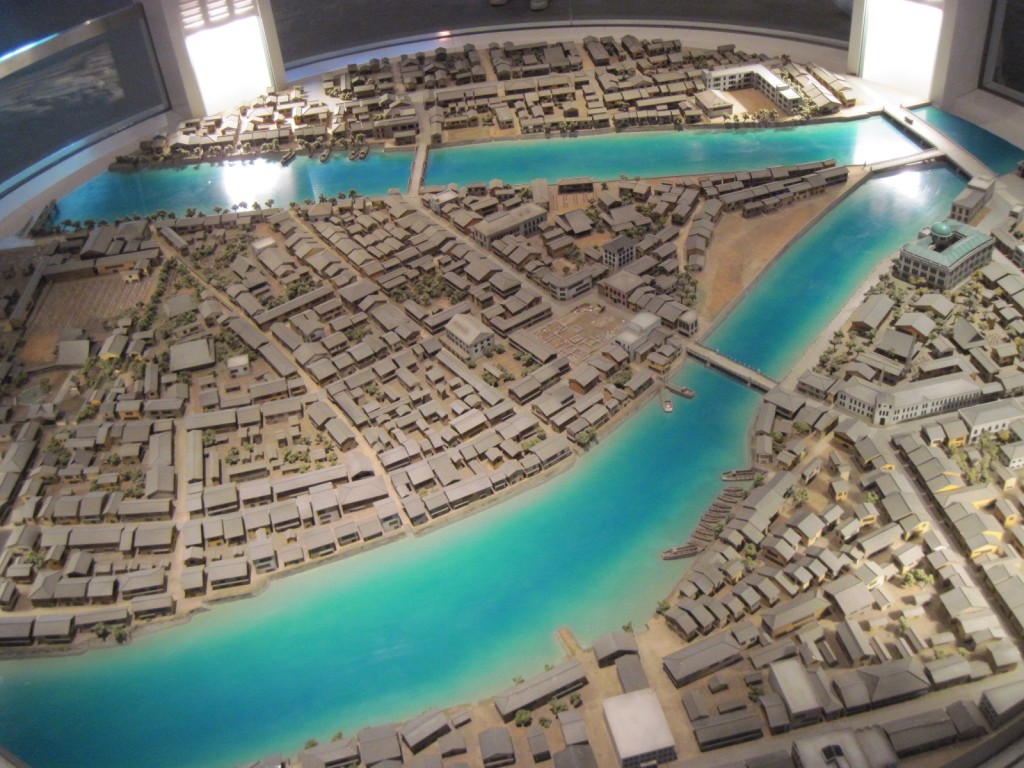 Model of Hiroshima before...the "T" bridge at upper right was what the bombardier was aiming for...

Model showing what was left...after

Photo of after, looking towards A-bomb Dome

We saw some of the paper cranes made by the Japanese girl Sadako Sasaki, who was two when the bomb hit.  Ten years later she developed leukemia, and while in the hospital she started folding origami paper cranes, because it was believed if you folded 1000 cranes, the gods would grant you a wish.  Folding these origami paper cranes has become a symbol of peace.

some of Sadako's cranes

Some of the facts about Hiroshima and the bomb were unimaginable…the flash was so bright that people’s shadows were “burned” into stone…people who happened to be touching a window towards the flash developed black fingernails that grew abnormally long…children were burned unrecognizable, but were still alive (but died later in a day or two), and whose parents only could identify them by their voices…we left the museum feeling drained. We sat on a bench along the river to regain some energy. 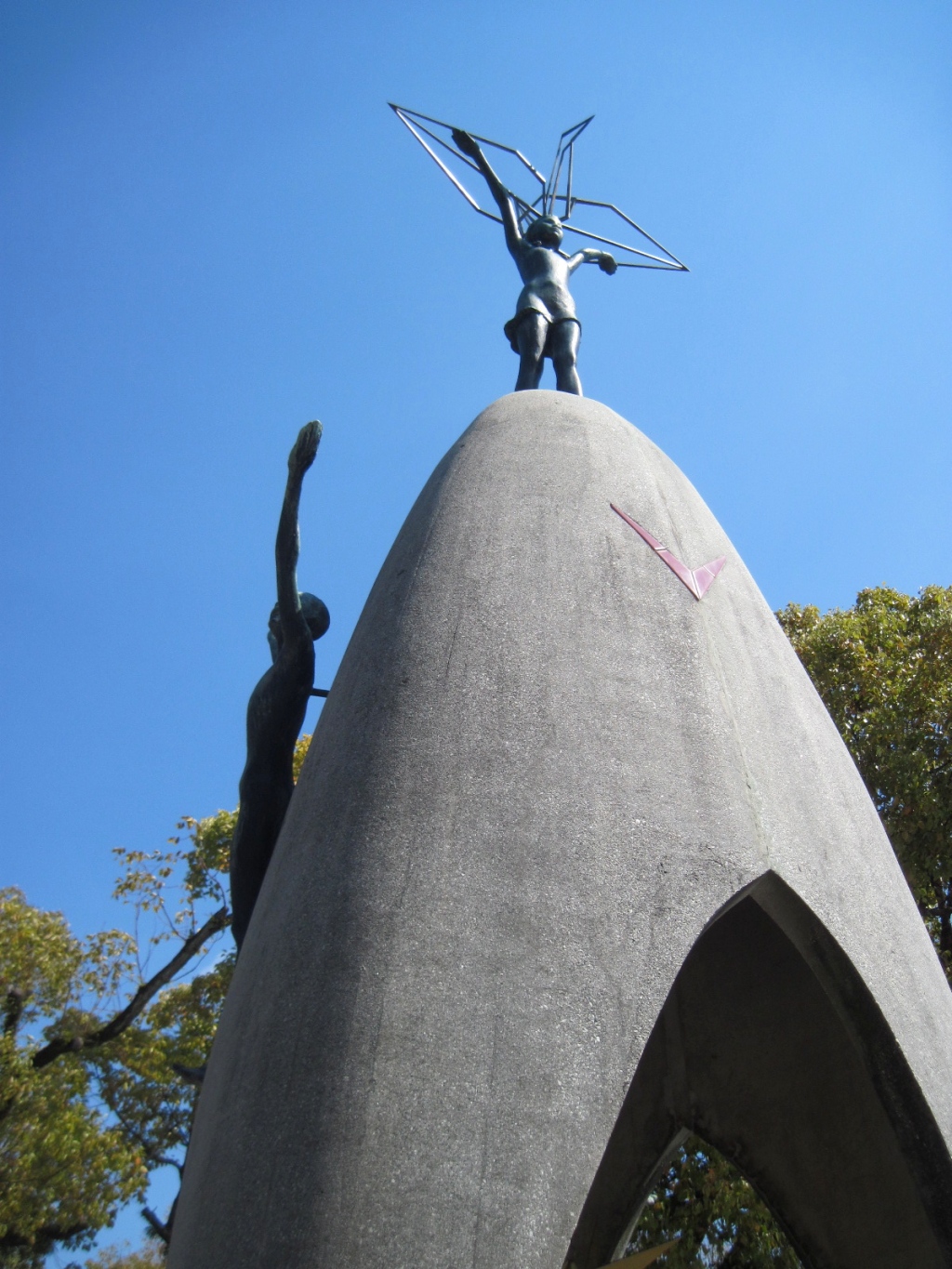 Part of the memorial to children who died in Hiroshima

In Nagasaki, we also visited the Peace Park.  Nagasaki is more hilly, and is in a large bowl, so the destruction was great there too, when the bomb exploded at 11:01 am on August 9, 1945.  Its population was about 240,000 before, and casualties numbered  70,000 dead, 70,000 wounded, and 120,000 left homeless…effectively the whole population… (from plaque in Nagasaki Peace Garden Park).

The fact that the only two atomic weapons used in war were in these two places, stayed with us.  Add to that the tsunami and nuclear damage from Fukushima, and Japan has been severely damaged by nuclear devices; it’s no wonder they are closing all of their nuclear plants!

After visiting these two places, we left thinking how important peace is, and how hard it is to maintain.  Barbara said that this experience really made her want to do something about peace (more than she already does in her work as a counselor).  “If peoples want peace, it is possible, if we are willing,” she says.

Peace be with you all, and with Hiroshima and Nagasaki.