We traveled to the city of Shangri-la, in the province of Yunnan last week.  Yunnan is in the southwest of China, next to Tibet in the northwest, Sichuan Province to the north, Myanmar to the west, Laos, and Vietnam to the south, and Guangxi and Guizhou Provinces to the east.

Shangri-la was not always called Shangri-la.  It was named this in November 1997, “when ‘experts’ had established with ‘certainty’ that the fabled ‘Shangri-la’ of James Hilton’s 1933 best seller Lost Horizon was, indeed, in Deqin County.” (Lonely Planet-China guide)  They said this valley matched the description from the book.  Interestingly enough, Hilton never went to China, and wrote the book in London.  It is believed he based his story’s location on the writings of Joesph Rock, who wrote about parts of China in National Geographic(Lonely Planet). 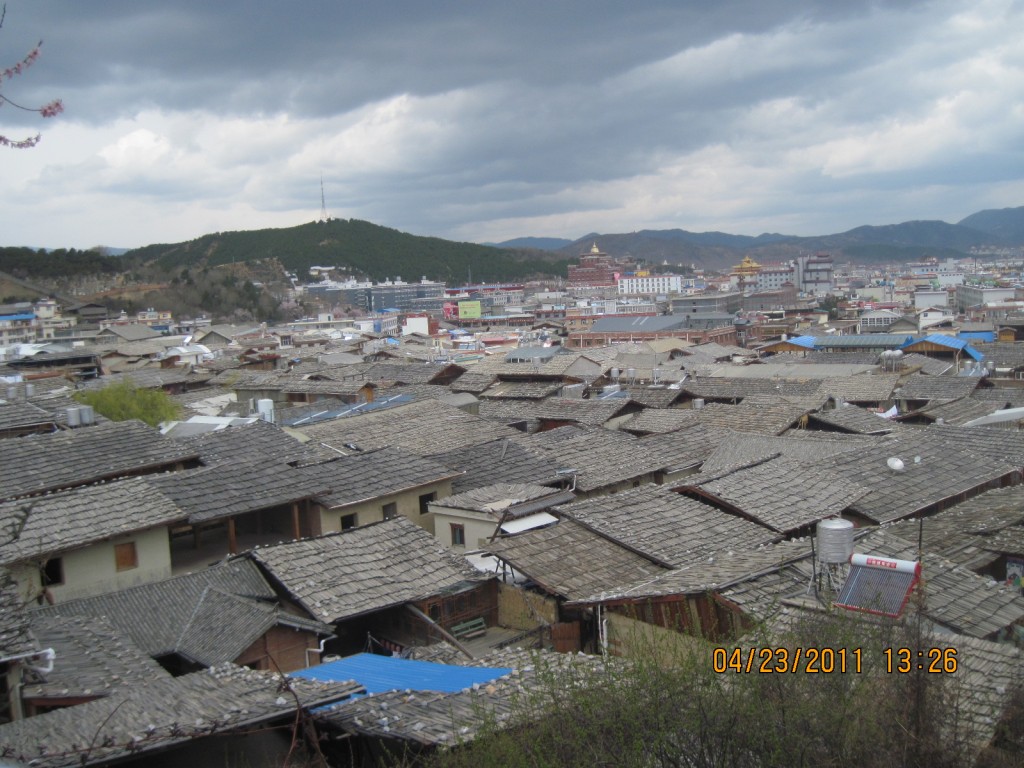 Whether Shangri-la is the same as the one in the book, who knows?  It is an obvious “tourist coup” that the Chinese have taken to heart.  It has an “old town” with cobbled streets and many shops, selling tourist goodies and local treats like dried yak-meat, or butter tea (made with yak butter).  We think the part of Shangri-la that was for tourists, was just that-for tourists…and a bit like a theme-park.  We found the actual city outside the tourist area, with its hustle and bustle, more interesting than the “Dried Yak Meat”  and souvenir shops. 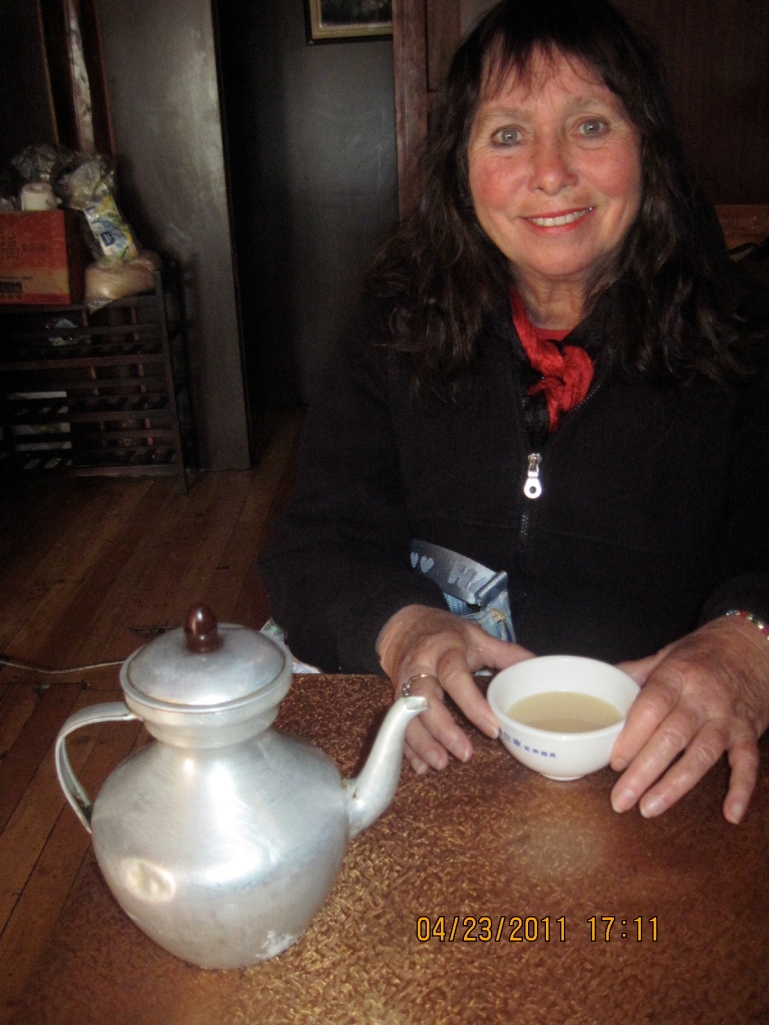 Shangri-la sells its proximity to Tibet, as its people look Tibetan(although only about 0.3 % Tibetan in all of Yunnan); it has a Tibetan history museum, prayer flags hanging everywhere,  stupas, and a large Buddhist Temple, complete with a giant prayer wheel, that people pull around in a clockwise direction. 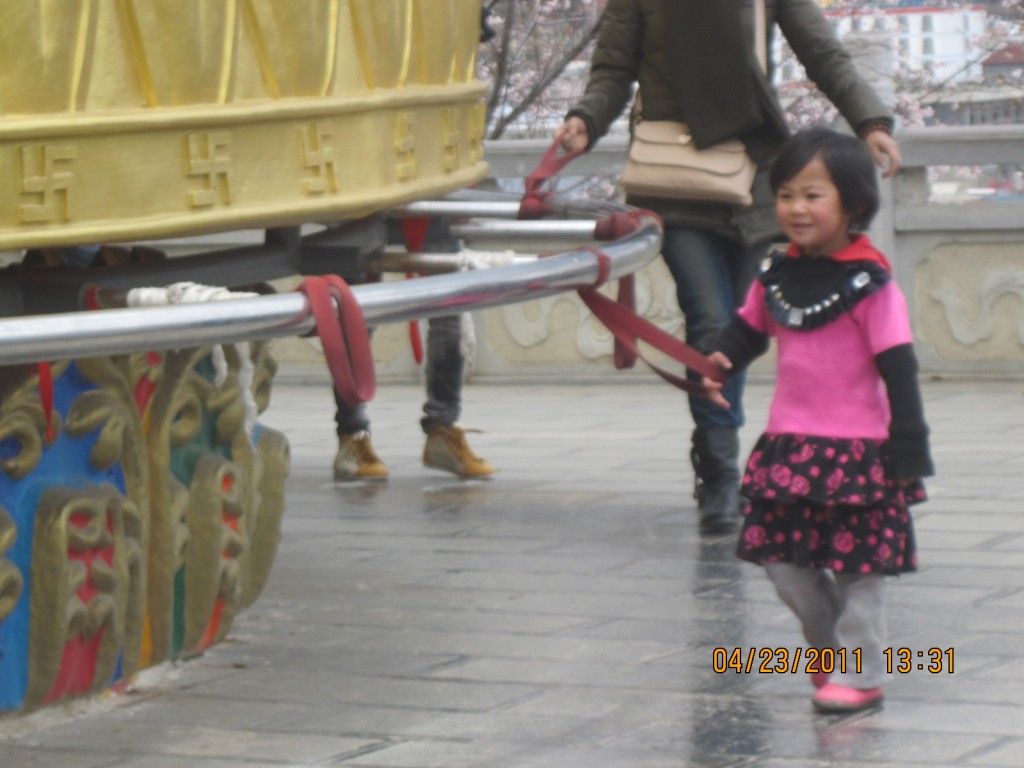 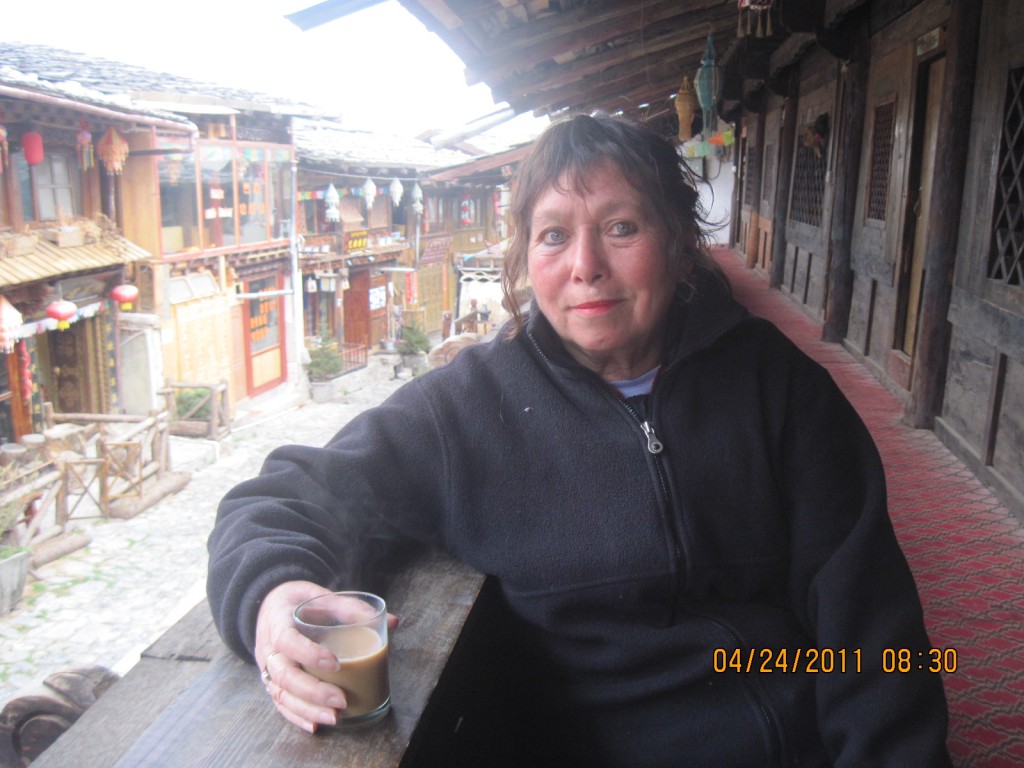 Barbara having coffee outside our room at Cobbler's Hill Inn

We ate a Tibetan breakfast in the square, with yak kabobs, chicken kabobs, and mushroom kabobs, with a side of grilled bread with chives inside.  This was our first big trip to the Chinese countryside, and the people were from different ethnic groups, not just Han (which accounts for over 91% of Chinese population). 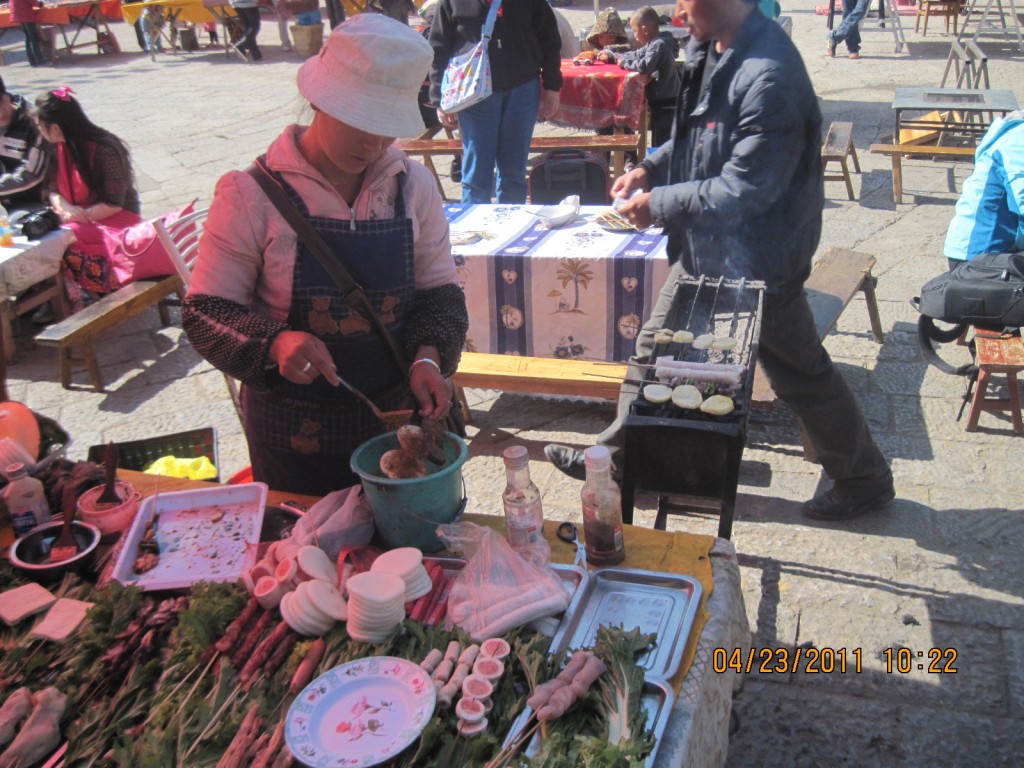 These ethnic groups dress in bright colors, as is their tradition, not just for the tourists.  The area is largely agricultural with yak-raising a big business and farming crops of vegetables, hay for the yaks, raising other animals like pigs, etc.

The farms are modern as we saw many red tractors that the farmers were using for all sorts of things-hauling wood, people, going to town, etc. 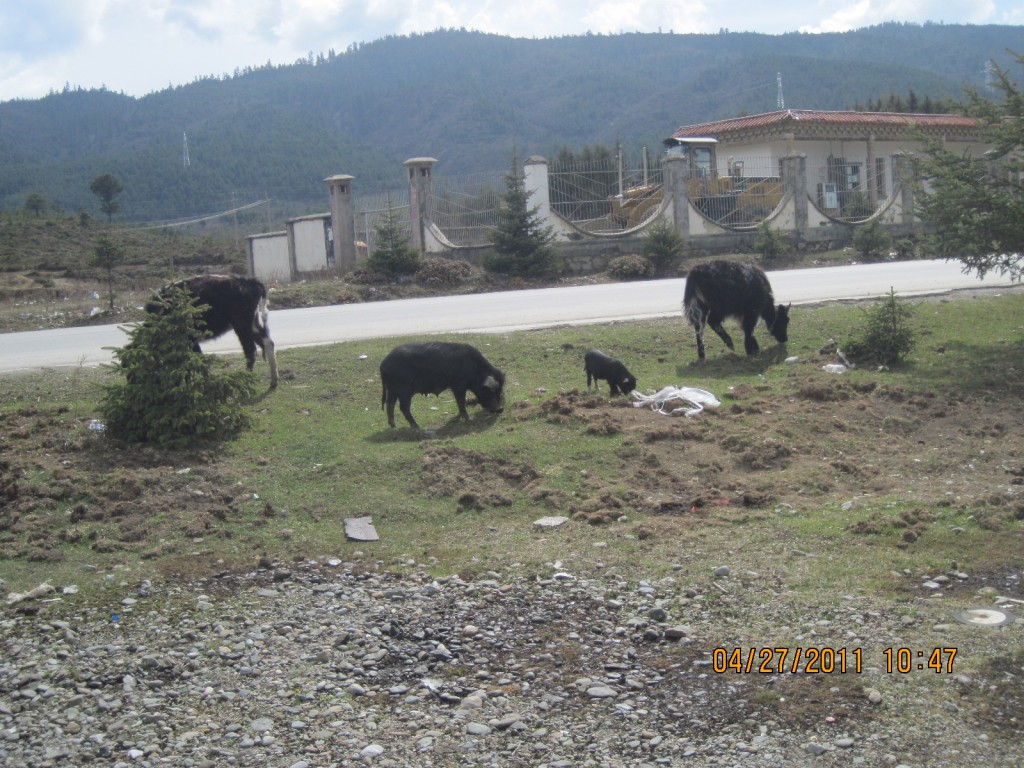 Big Yak attack (and pigs too)

Yaks are a part of the cow family and do well in cold climates with their shaggy coats.  We saw numerous yak-fur items such as yak brooms or dusters made of their fur.

One interesting thing we saw was how they dry hay here.  They have raised hay racks in their fields.  The farmers live in large two-story houses with room on the first floor for livestock and people live on the second floor.  The winters get pretty cold here.

As we said, it gets pretty cold here at night.  They burn wood at night to keep warm.  We went in a cafe with a woodstove going in the day.  People were gathered around the stove drinking tea. 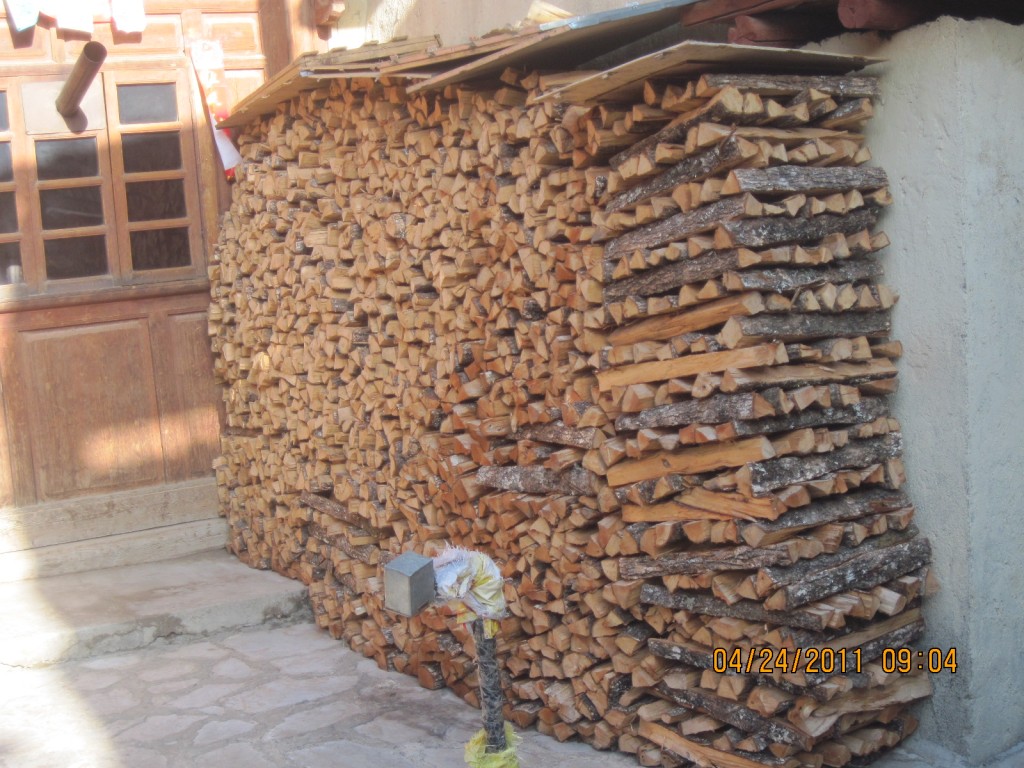 Shangri-la stack of wood to keep warm with

We only stayed in Shangri-la one day and night.  We walked around  the old town, visited the Buddhist temple, walked about the regular town, and enjoyed the clean fresh mountain air. 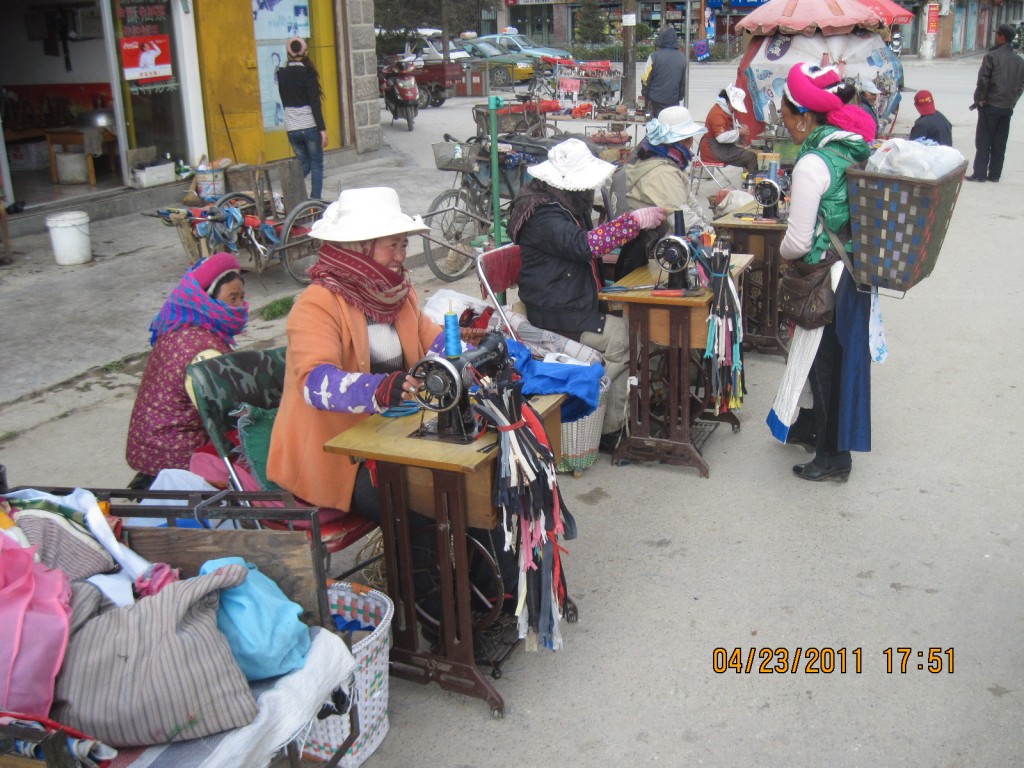 Women with sewing machines making goods on the street 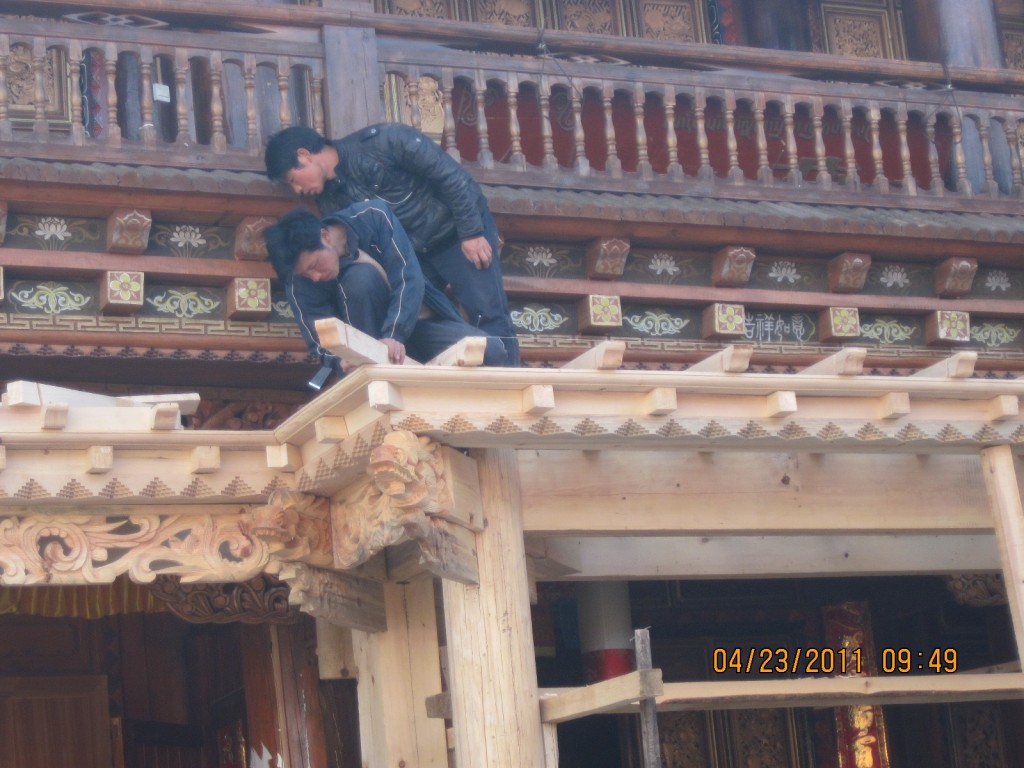 Wood carving and construction in Shangri-la 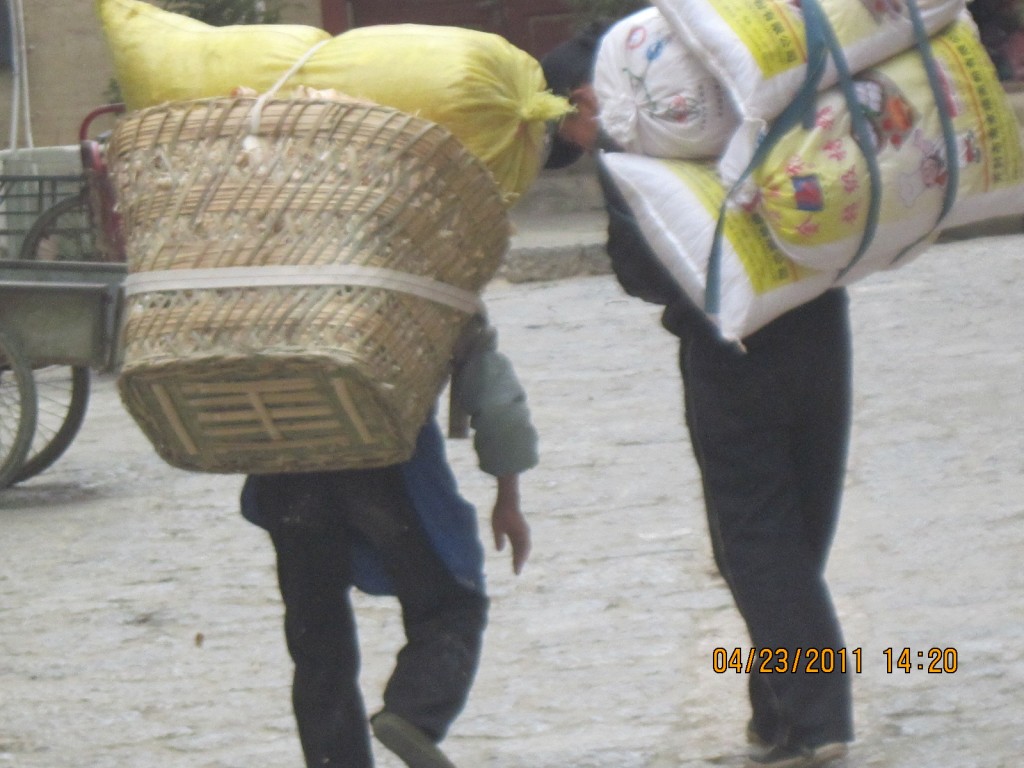 We left Shangri-la the next day, taking a bus to Lijiang, another city in Yunnan about 4 hours away from Shangri-la.  More about that in the next post. 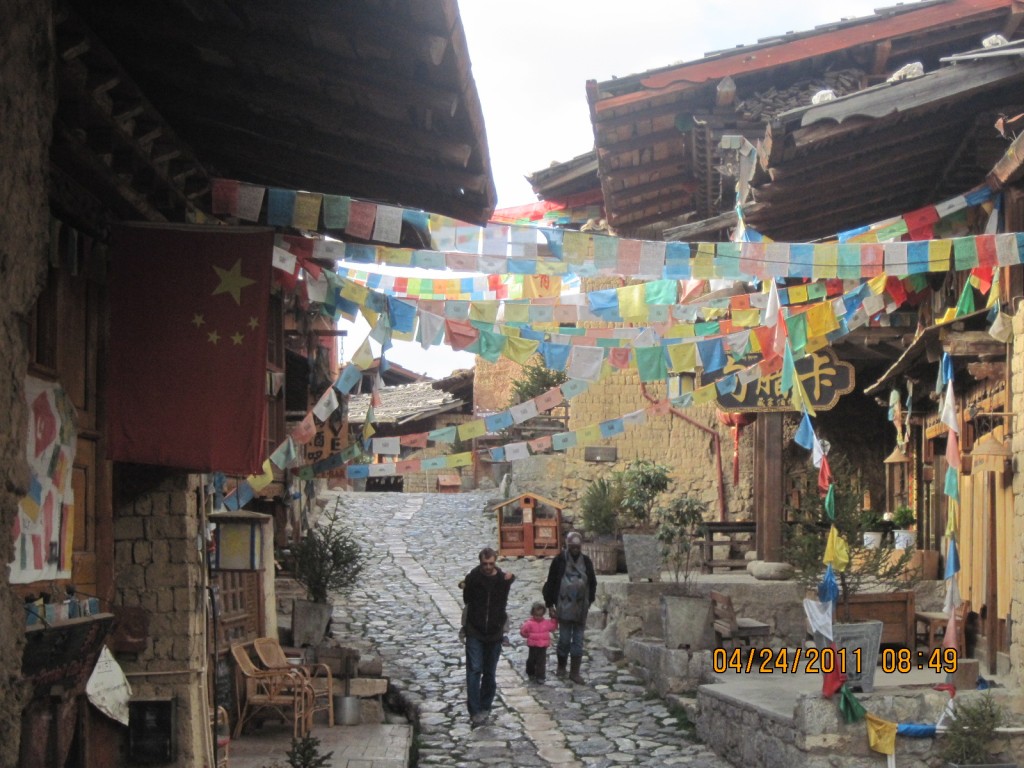 Whether this is the real Shangri-la or just a tourist destination for Chinese and others, we’ll leave this up to you to decide.  We could see the similarities, as we bought the book, Lost Horizon, and read it through, looking for clues.