You have probably heard about the latest devastating earthquake that happened in Christchurch, Tuesday, February 22.  We had seen earlier damage from the big quake that they had last September.  That quake resulted in no loss of life and was 7.1 on the Richter scale.  This latest, though 6.4 in scale, resulted in much more damage and many deaths.  We are so sad to learn such a beautiful place has been hit again.  It seems that a place like this, which is located right on the edges of two tectonic plates, has such spectacular landscape variety, like hot springs, geysers, mountains, fiords, because it is located where it is.

New Zealand is much smaller than Australia.  It is about the size of Colorado in area (or about three times the size of Maine).  From top to bottom of both islands, it is about 1000 miles, and each island is about 150-200 miles wide.  There are 4.4 million New Zealanders, or Kiwis, as they like to call themselves.  Many of these people live in the major cities, so the countryside can be very deserted.

We started out in Christchurch, New Zealand’s second largest city (380,000+) after Auckland.  As we mentioned earlier it was hardest hit in the earthquake. It is/was a beautiful old city.  We visited the botanical gardens there that were spectacular.

Barbara in the Rose Garden at Botanical Gardens

The downtown area we stayed in was heavily damaged in the quake.  On our way out of Christchurch we were lost and drove through the tunnel to Lyttleton, the epicenter of the recent quake.  We sincerely hope that the New Zealanders are able to rebuild Christchurch, after this tragedy.

We followed Route 1 along the southern island’s east coast.  We went through large farmlands with many beef and dairy cows, sheep, sheep and more sheep.   There are 60 million sheep in all NZ.  We felt that we saw a few million in our travels.  We thought the sheep looked like pillows in the fields.

"Pillows" in a field

More "pillows" in a field

We came to the coastal town of Oamaru.  We heard that you can see penguins coming in after sunset to nest in the rocks after their day of fishing.   We ate at a pub-style restaurant called the “Last Post.”  The “Last Post” is the bugle call that signals the end of the day in the British military (Wikipedia).  After dinner we  went to look for penguins.  We were unsuccessful at first, we could hear them calling to one another in the water, but we couldn’t see them on land.  We moved over to the other side of the cove where a road followed the shore and was lit by streetlights.  We saw a couple of blue penguins coming up the shore.   We went to take their picture.  They stopped.  A local man was out watching them.  He said to us, “Don’t take flash pictures of them…it scares them…and don’t stand in their way…they’re just on their way home…they’ve been working all day… swimming and fishing…they want to go to sleep!”  We followed his advice and took pictures with no flash, and we stayed out of their way.  Blue penguins are the smallest penguins…only getting about a foot tall.  We thought these little “waddlers” were very brave.  They could see us, were afraid of our size, but still were intent on getting to bed.

We saw four separate penguins along a boat ramp, one was on the ramp, the other three hiding in the shadows of rocks.  As the one leader walked up the ramp the other three joined it, one by one, so there was a little phalanx of four marching penguins going by us. 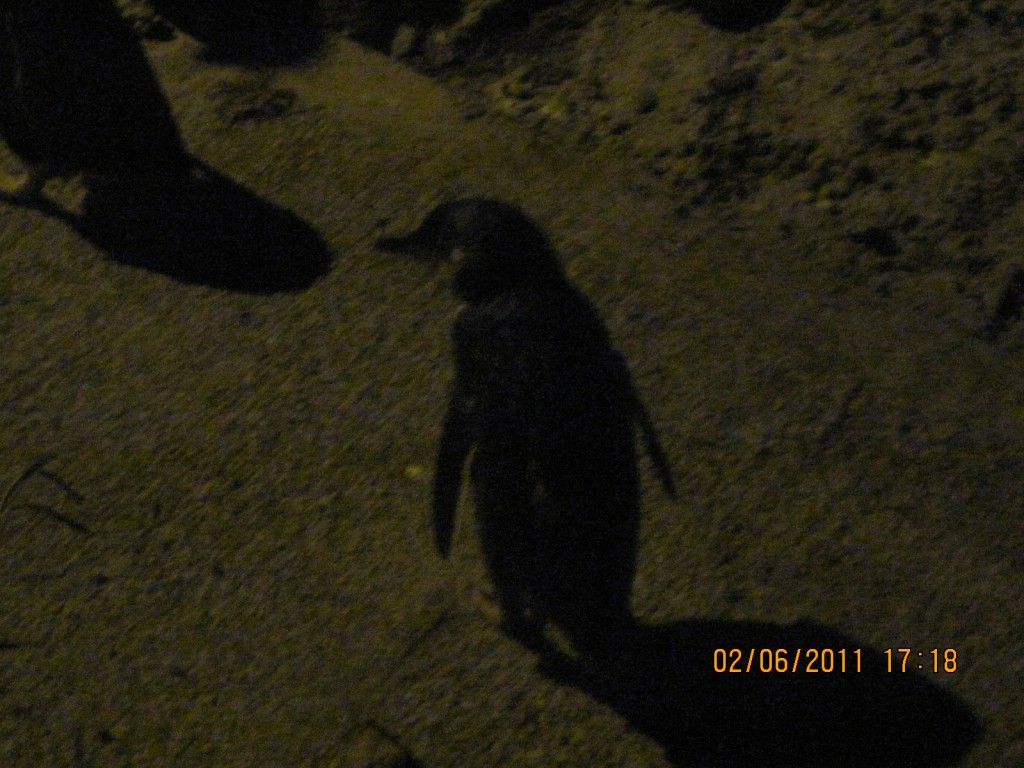 Little guys in the lamplight

Seeing the penguins was one highlights of our visit to NZ.  There was something very inspiring about them.

The next day we went further south visiting the Moeraki Boulders.  These mostly perfect round boulders are on the beach and look like huge marbles left  behind by some giants who were playing on the beach.  The Maori legend says they are from the wreck of the great canoe called Arai Te Uru.  It was caught in a storm offshore, wrecked, and its cargo washed ashore.  The round food baskets and water gourds are the Moeraki boulders.  The “seed kumara”. or sweet potatoes, washed ashore further south and represent the irregularly shaped stones found there.  The scientific explanation is not as interesting. 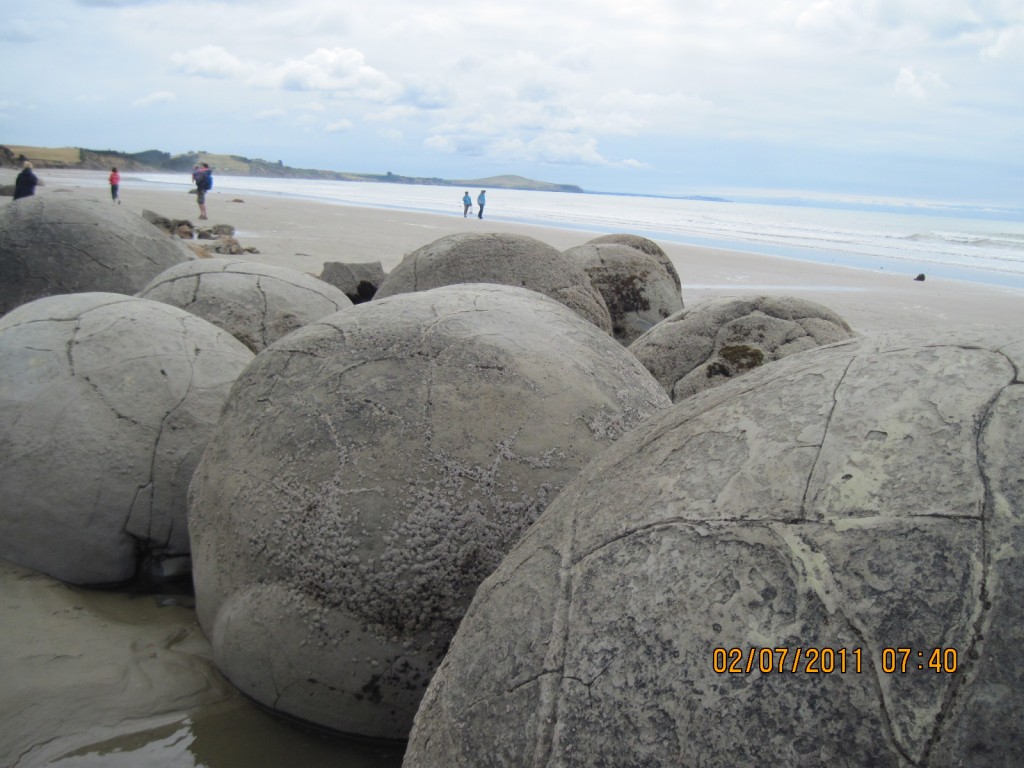 These boulders are described as “concretions,”  large round stones formed  from sedimentary rock over millions of years. somewhat like a pearl, starting with a central “organic nuclei” that the “(brown)mineral calcite… crystallized around… to form spherical nodules.”  Geologists estimate this took from 120,000 years for a small concretion (0.5m in diameter) to over 4 million years for a large one (over 2m in diameter).  This outside material became hard and brittle, began to dehydrate, and crack.  The cracks were then filled with yellow calcite crystals.   Some, as you can see in the pictures, are eroded by the sea water, making holes in them, exposing vein crack-lines and striations, called “turtle backs,” from their markings.  You can see the different colored crystals of the core and the later yellow crystals in the veins, or cracks. (Source: Moeraki Boulders brochure, copyright Institute of Geological and Nuclear Sciences LTD 2007, Lower Hut, NZ, website http://www.gns.cri.nz)

These boulders were buried in the mudstone banks near the beach and the erosion of the bank by the ocean exposes more of them.

We went into the city of Dunedin, further south on the east coast. It is the second largest city on the South Island.  It is the home to the University of Otago, New Zealand’s oldest university.  It has over 20,000 students.   Dunedin was started by Scots, so it has a Scottish feel.

We drove to the tip of the South Island and over-nighted in a town called Invercargill.  From there we went on to Fiordlands National Park, and the tourist attraction Milford Sound.  It is located on the western side of the island on the Tasman Sea. 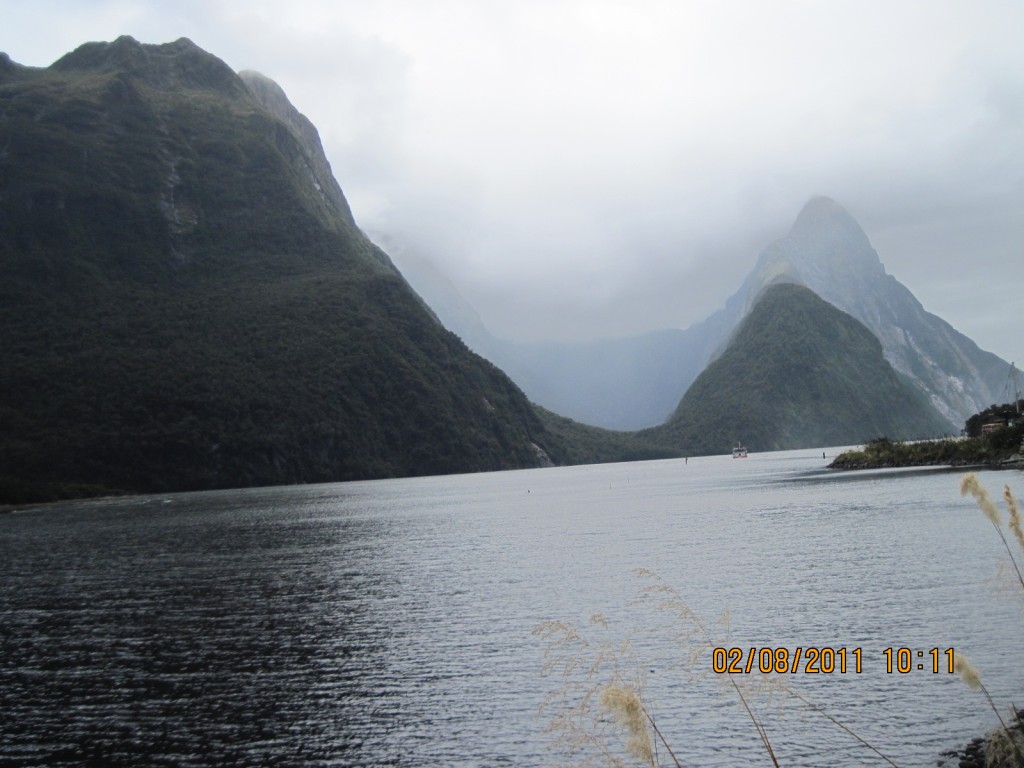 The roads are pretty narrow out in the country.  The road leading into Milford Sound was one lane in places.  Fantastic mountains rise up on both sides of the road.  Fiordlands is described as the “Place of 1000 Waterfalls.” 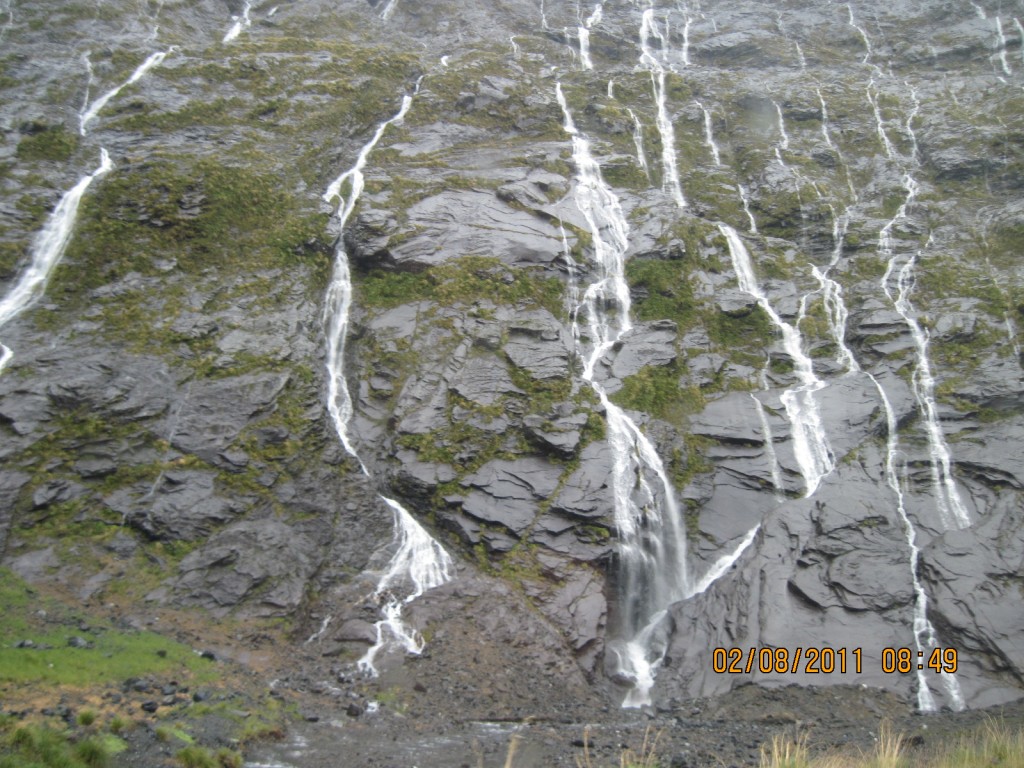 There were many people at Milford Sound.  You could take boat rides, helicopter rides, and plane rides to view the sound and fiords. It was a little rainy while we were there, but the views were still fantastic.  The mountains, called the Southern Alps, hug the west coast of the South Island.  Mt. Cook, or Aoraki in Maori, the tallest in NZ, is 3754m, or 12,316 ft.

We drove on to Queenstown, the biggest major town near Fiordlands.  It is quite busy with tourists and is the start of many bus tours to Milford Sound.  It sits on the side of a mountain overlooking a beautiful lake.  It has a cable car to the top of the mountain for even better views of the Remarkables, the aptly named mountain range it is in.

The Remarkables near Queenstown

We went further to the small town of Arrowtown and stayed overnight there.  It was less touristed, also surrounded by mountains.  The next day we followed twisting turning roads up through these mountains, over passes or between ranges, and then twisting and turning roads down to the west coast.  The mountains are spectacular, as they have volcanic history, glacier formation/shaping, and have gorgeous lakes and streams with beautiful turquoise blue water.  As we were there in summer, many of the streams were running small with blue-gray glacial water.  You could see from the wide expanse of dry stone stream-bed that the streams/rivers were extremely wide during the spring.

We moved north up along the Tasman Sea into the glacier region.  We stopped to see the Fox Glacier.  There are a number of glaciers here surrounding Mt. Cook and its neighboring mountains.  The glacier, while large, has slowly been shrinking, from what it was 50 years ago.  Global warming, maybe?

We went further up the west coast to the “Gold Coast.”  It was one of the places in NZ that gold was discovered.  You could pan for gold if you liked, or just buy gold, in the town of Hokitika.  This part of the west coast has crashing surf and interesting formations from the action of ocean water.  We went to Punakaiki to see the “Pancake Rocks,” which resemble piles of stone pancakes shaped by seawater “syrup.” 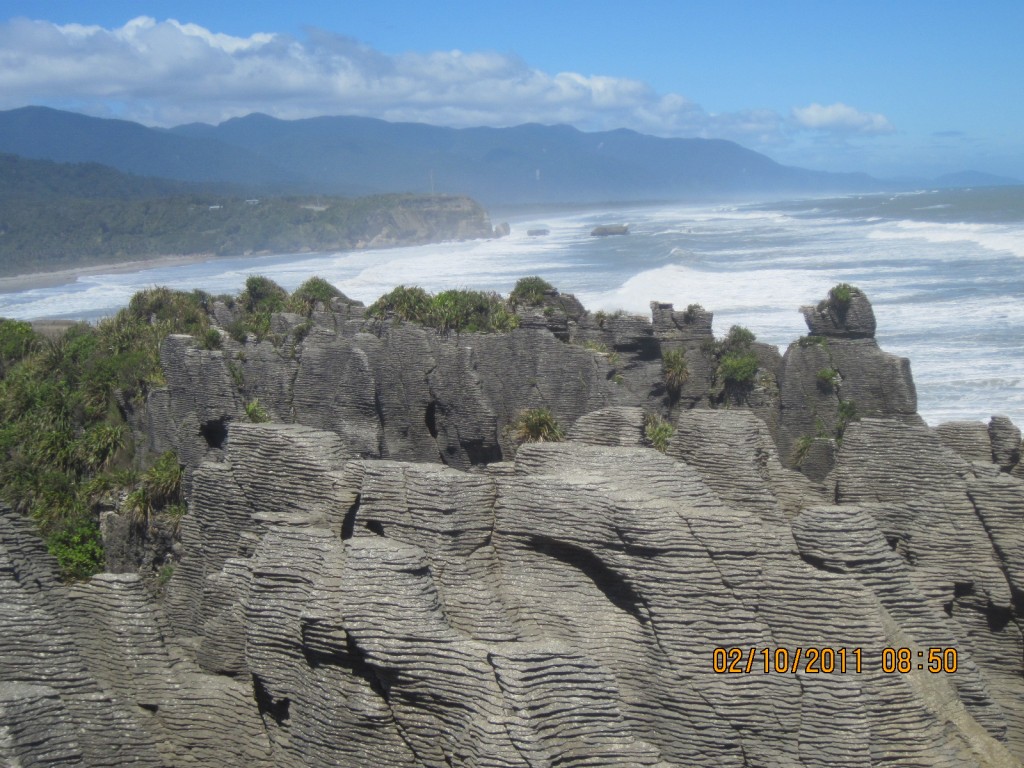 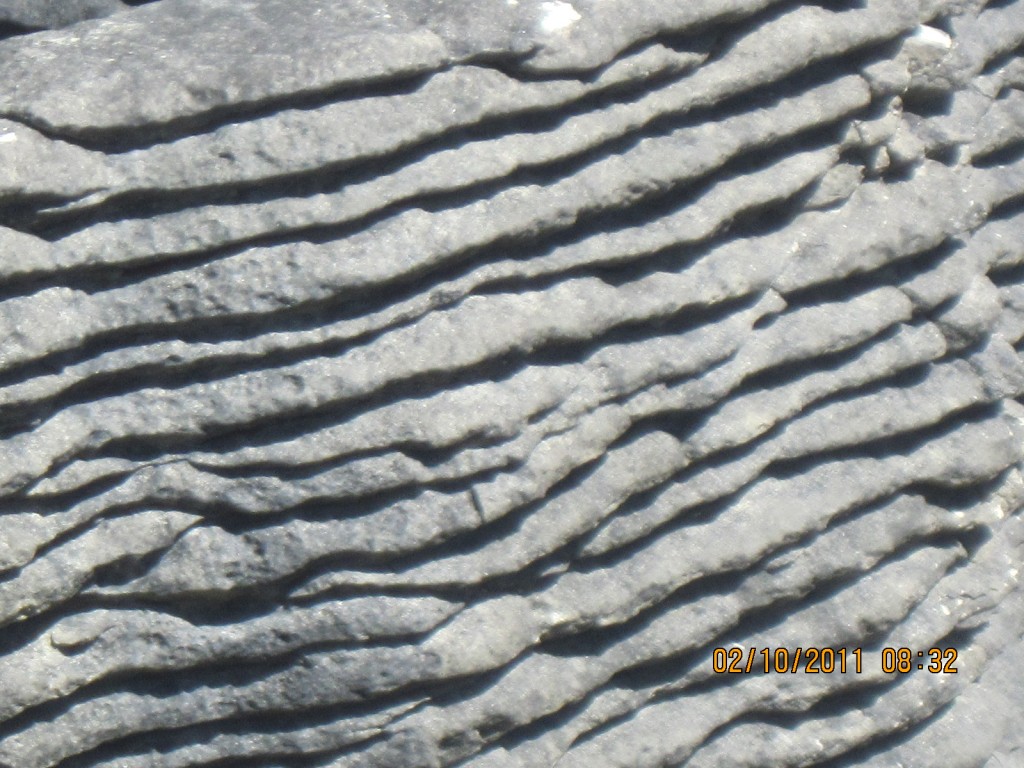 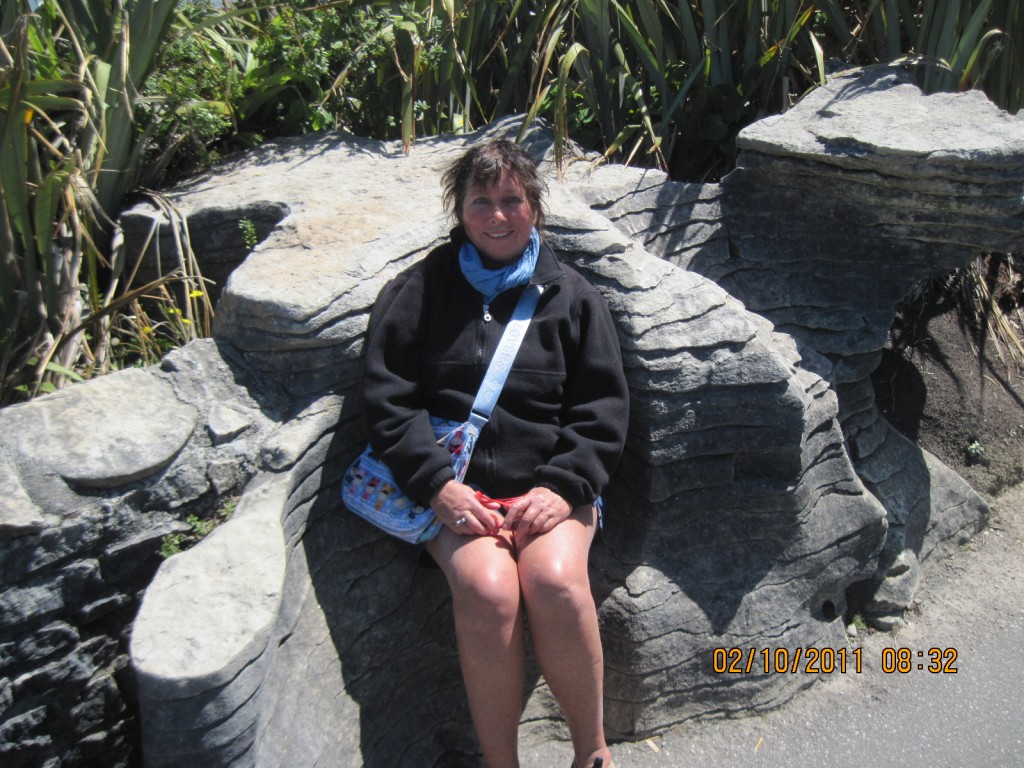 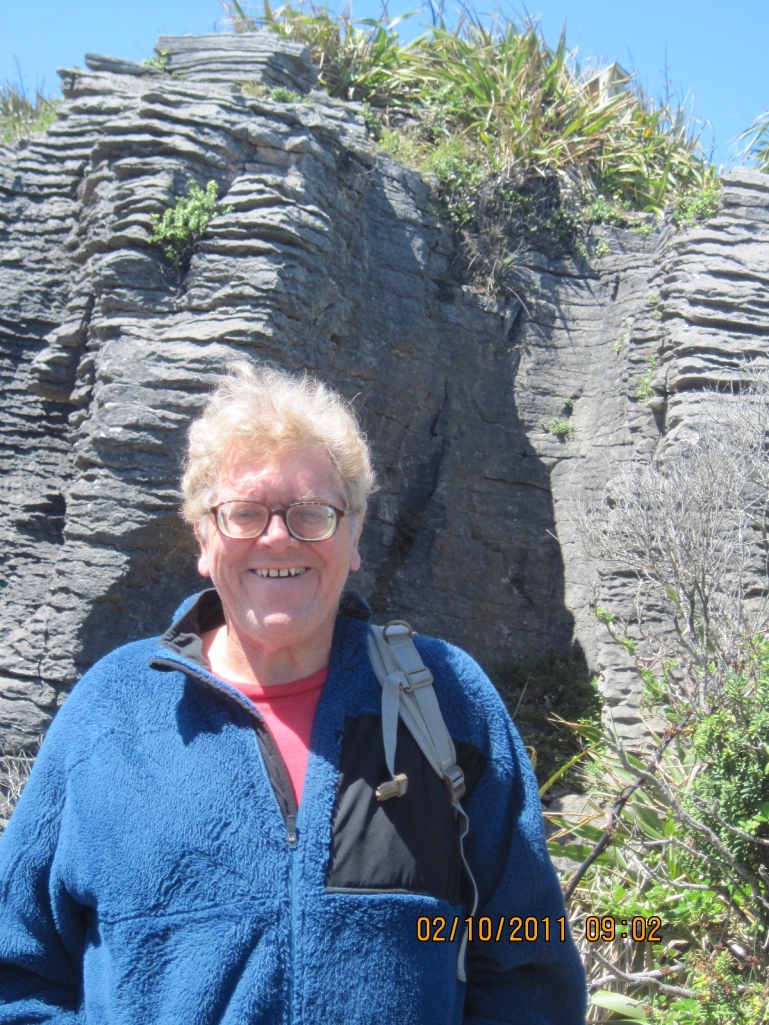 We did not have quite enough time to go to Nelson and then back to Christchurch, to complete our circle of the South Island.  We needed another day to do that.  Oh, well, maybe another time?  We crossed back over the mountains again to the east side, stopping at a hot springs for a night to soak in thermal pools.  The place we stayed at got all their hot water for showers and generated their own electricity from the thermal water.  NZ prides itself on being ecologically friendly in its tourism.  With the recent earthquakes, New Zealand hopes the tourists still come as tourism has become such a large part of its economy.  Tourism is NZ’s “largest export industry” with “2.4 million visitors per year” (Wikipedia).  Unlike Australia, which is booming with jobs in the mining industry and gathering resources to sell to China, New Zealand depends on agriculture and tourism for much of its economy.  Many New Zealanders leave the island to find work.  This is especially true of the younger generation.

We really liked visiting New Zealand and hope it recovers from the earthquake.  Part of its appeal is its small population, beautiful landscape,  and feeling of almost being “at home.”  It helps that the language is English, and we could mostly understand it.   The fact that we work with many “Kiwis” at our school has helped our understanding.  Lastly, some of New Zealand’s appeal is that it feels less hurried, relaxed, and even a little “old-fashioned.” while being thoroughly modern.  As the picture below shows, it still has some businesses that have all but disappeared from the U.S.   So long, to Kiwi-Land! 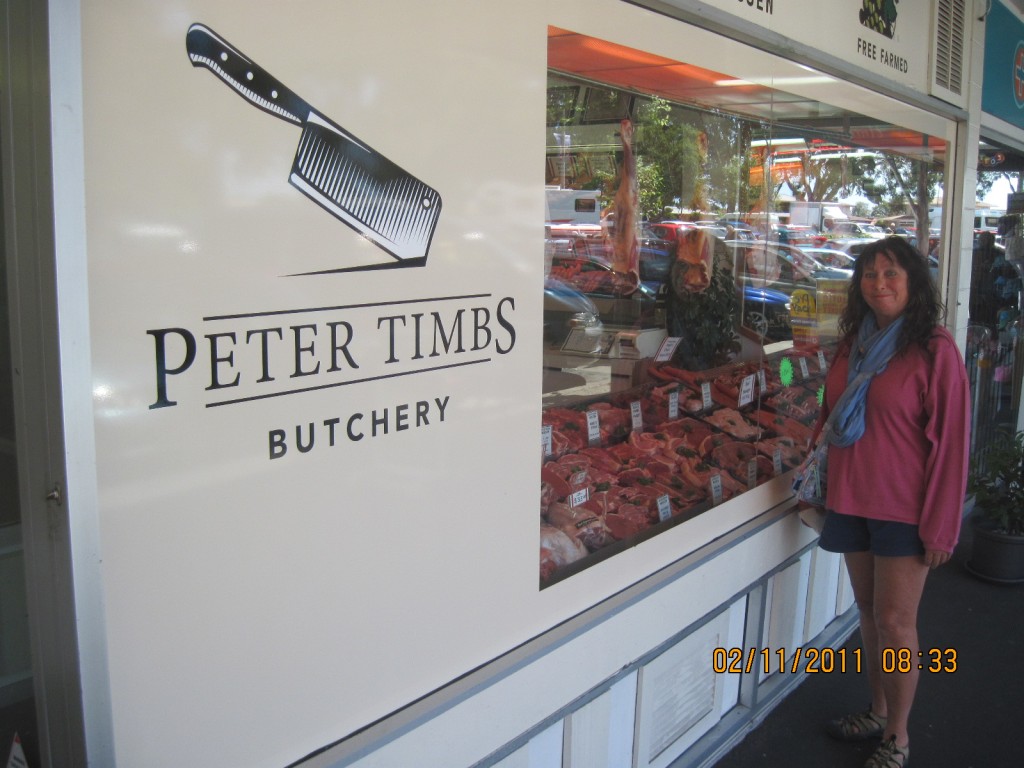